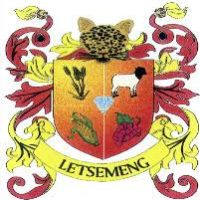 Koffiefontein/Dithlake serves as the municipal administrative seat within Letsemeng. It is situated approximately 125 km northwest of Trompsburg and an estimated 146 km east of Bloemfontein. The transport riders travelling through this area were prone to stop for a coffee break at the spring in this vicinity. This area therefore became known as Koffiefontein. In 1870, one the riders found a diamond near the spring and this set off a rush for prospective diamond hunters. The settlement grew and maintained its original name and by 1882 was considered a boom town with four mining companies working the area. Koffiefontein was awarded municipal status in 1892.

The 2nd World War saw Koffiefontein as a prisoner-of-war camp for Italian soldiers. Pro-Nazi South Africans were also interned here. They left their mark in the form of large outdoor paintings of Victor Emanuele and Benito Mussolini.

Koffiefontein is one of the five producing mines in the Petra Diamonds group – a leading supplier of rough diamonds. Koffiefontein is one of the world’s top kimberlite mines by average value per carat. The mine produces high-value diamonds, a regular proportion of which are beautiful white diamonds between 5 and 30 carats in size. The average value per carat achieved in the financial year to June 2009 was US$252, which is high compared to the world’s kimberlite mines. In 1994, a 232.34 carat diamond was recovered at Koffiefontein, being the largest rough diamond ever produced by the mine.

Petra acquired Koffiefontein in July 2007 from De Beers for R81.9 million and, having conducted care and maintenance activities at the mine in the 12 months prior to completion, was able to bring the mine on stream immediately. This acquisition marked the initial implementation of Petra’s strategy to become a significant diamond producer as historically, production had been solely from the Group’s fissure mines. The acquisition has proved to be exceptional for Petra as Koffiefontein is now a major contributor to Group revenue, and its high-value production is highly sought after in the international diamond market.

Petrusburg was named after Petrus Albertus Venter whose estate provided the money to buy the farm Diepfontein, on which the town was laid out in 1891 as a church and commercial centre for an extensive farming area. Mixed farming is practised in the 3000 square km which was excised from the Fauresmith district in 1863. The main activity is sheep farming. The main crops are maize and potatoes. Modest quantities of wheat are harvested in the rare season when enough rain falls in winter and early spring. There are numerous salt pans in the district. The centre point of South Africa is situated approximately 20 km outside the town.

Petrusburg/Bolokanang serves as a commercial and social service centre within Letsemeng. It is situated approximately 55 km northeast of Koffiefontein. The main social and economic functions of the town include: main regional agro-processing centre, secondary agricultural service centre, social functions such as residence, education and medical services and transport support services on major routes. As is the case with many other towns in the Free State, Petrusburg has a number of historical sites. These include the Paardeberg Anglo Boer-War Museum located 23 km outside of town. The Poplar Grove Battle, where Christiaan de Wet tried unsuccessfully to prevent British advancement into Bloemfontein, is one of many battles that were fought in the area.

The small town of Jacobsdal was laid out on the farm Kalkfontein in 1859 and was named after the owner of this land, Christoffel Johannes Jacobs. Jacobsdal/Ratanang serves as an economic growth and tourism development node within Letsemeng. It is situated approximately 45 km northwest of Koffiefontein. Operation Hlasela activities of the Free State provincial government in the town include the construction of 50 new low-cost housing units.

Located at Jacobsdal, the Landzicht Wine Cellar opened in 1974. Owned by GWK Limited and producers, it annually presses ± 3 000 tons of grapes, producing ± 2.4m litres of wine. A new bottling plant using the latest technology was opened in April 2005 as a black empowerment project. Amongst the premium wines produced from pure certified cultivars are 5 whites, 4 reds, 1 Rosé and several fortifieds such as White Muscadel and Ruby Port. Landzicht wine labels range among the best in South Africa having won several Veritas, SA Youngwine Show and Michaelangelo awards. The Winery offers cellar tours and wine tasting.
Tweet This
This Ad has been viewed 1172 times.

The Mafube Local Municipality is located in the Fezile Dabi District Municipality. Mafube, a Sotho name meaning, “where the sun rises”, is one and a…
28/10/2018
FRANKFORT
Free State
Total views: 1056

Locate a boutique hotel in South Africa. “Boutique hotel is a term used initially in North America as well as the United Kingdom to describe…
10/05/2018
Sandton
Total views: 645

The Setsoto Local Municipality was established in terms of Section 14 of the Local Government: Municipal Structures Act, Act No 117 of 1998 and was…
28/10/2018
Ficksburg
Free State
Total views: 565

Maluti-A-Phofung Local Municipality was established in terms of the provincial Gazette No. 14 or 28 February 2000 issued in terms of Section 21 of the…
28/10/2018
Phuthaditjhaba
Free State
Total views: 911