The land and People of South Africa. South Africa occupies the most southern tip of Africa with its long coastline stretching more than 3 000 km from the desert border with Namibia on the Atlantic coast southwards around the tip of Africa and then north to the border of subtropical Mozambique on the Indian Ocean. The country has more than 290 conservation parks. It is home to almost 300 mammal species, about 860 bird species and 8 000 plant species. The annual sardine run is the biggest migration on the planet. South Africa comprises eight world heritage sites and is divided into eight biomes. (A biome is a community of plants and animals that have common characteristics for the environment they exist in.)

The country is considered to be the cradle of humankind and boasts 40% of all hominid finds on Earth.

Stretching latitudinally from 22°S to 35°S and longitudinally from 17°E to 33°E, South Africa’s surface area covers 1 219 602 km. Physical features range from bushveld, grasslands, forests, deserts and majestic mountain peaks, to wide unspoilt beaches and coastal wetlands. The country shares common boundaries with Namibia, Botswana, Zimbabwe, Mozambique and Swaziland, while the Mountain Kingdom of Lesotho is landlocked by South African territory in the south-east. The Prince Edward and Marion islands, annexed by South Africa in 1947, lie some 1 920 km south-east of Cape Town.

The warm Mozambique-Agulhas Current skirts the east and south coasts as far as Cape Agulhas, while the cold Benguela Current flows northwards along the west coast as far as southern Angola. The contrast in temperature between these two currents partly accounts for significant differences in climate and vegetation, as well as differences in marine life. Owing to the cold waters of the west coast being much richer in oxygen, nitrates, phosphates and plankton than those of the east coast, the South African fishing industry is centred on the west coast. Saldanha Bay on the west coast is the only ideal natural harbour.

None of the country’s rivers are commercially avaliable to be sailed on by ships and most river mouths are unsuitable as harbours because large sandbanks block entry for most of the year. South Africa has no significant natural lakes. Artificial lakes are used mostly for crop irrigation. The Orange River is South Africa’s largest river. Rising in the Drakensberg Mountains, it traverses through the Lesotho Highlands and joins the Caledon River between the Eastern Cape and the Free State before it empties into the Atlantic Ocean forming the border with Namibia. Other major rivers include the Vaal, Breede, Komati, Lepelle (previously Olifants), Tugela, Umzimvubu, Limpopo and Molopo.

(Relief basically means the terrain of the earth. It shows the difference in elevation of various physical geographical features in a given area, such as mountains, valleys, plains and plateaus all have different elevations.)

South Africa’s surface area falls into two major physio-graphic categories: the interior plateau and the land between the plateau and the coast. Forming the boundary between these two areas is the Great Escarpment, the most prominent and continuous relief feature of the country. Its height above sea level varies from about 1 500 m in the dolerite-capped Roggeveld scarp in the southwest, to 3 482 m in the KwaZulu-Natal Drakensberg. Inland from the escarpment lies the interior plateau, which is the southern continuation of the great African plateau stretching north to the Sahara Desert. The plateau is characterised by wide plains with an average height of 1 200 m above sea level.

The dissected Lesotho plateau, which is more than 3 000 m above sea level, is the most prominent. Between the Great Escarpment and the coast lies an area which varies in width from 80 km to 240 km in the east and south, and 60 km to 80 km in the west. At least three major subdivisions are recognised – the eastern plateau slopes, the Cape folded belt and adjacent regions, and the western plateau slopes.

A subtropical location, moderated by ocean on three sides of the country and the altitude of the interior plateau, 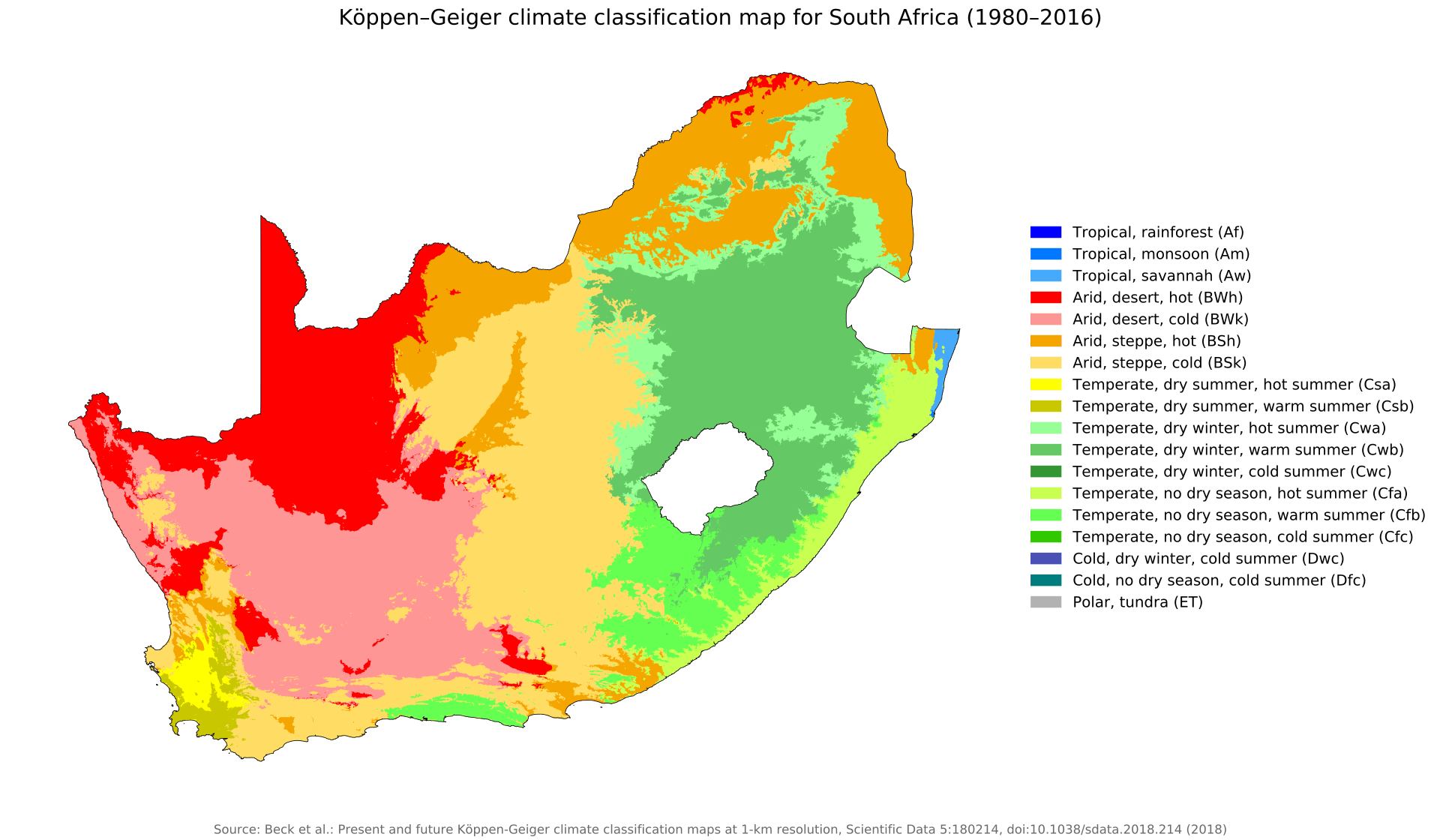 account for the warm temperate conditions. South Africa is a relatively dry country, with an average annual rainfall of about 464 mm. While the Western Cape gets most of its rainfall in winter, the rest of the country is generally a summer-rainfall region. Temperatures in South Africa tend to be lower than in other countries at similar latitudes owing mainly to greater elevation above sea level. On the interior plateau, the altitude – Johannesburg lies at 1 694 m – keeps the average summer temperatures below 30°C. In winter, for the same reason, night-time temperatures can drop to freezing point or lower in some places. South Africa’s coastal regions are therefore relatively warm
in winter.

Migration is an important demographic process in shaping the age structure and distribution of the provincial population. For the period 2016–2021, Gauteng and Western Cape are estimated to experience the largest inflow of migrants of approximately, 1 595 106 and 485 560 respectively.

The estimated overall HIV prevalence rate is approximately 12,6% among the South African population. The total number of people living with HIV is estimated at approximately 7,06 million in 2017.

For adults aged 15 to 49 years, an estimated 18,0% of the population is HIV positive. The number of AIDS-related deaths declined consistently since 2007 from 345 185 in 2006 to 126 755 AIDS related deaths in 2017. Access to antiretroviral treatment has changed historical patterns of mortality. Access to ART has thus extended the lifespan of many in South Africa, who would have otherwise died at an earlier age, evident in the decline of AIDS deaths post-2006.

Besides the official languages, scores of others – African, European, Asian and more – are spoken in South Africa, as
the country lies at the crossroads of southern Africa. Other languages spoken here and mentioned in the Constitution
are the Khoi, Nama and San languages, sign language, Arabic, German, French, Greek, Gujarati, Hebrew, Hindi, Portuguese, Sanskrit, Tamil, Telegu and Urdu. There are also a few indigenous creoles and pidgins.

English is generally understood across the country, being the language of business, politics and the media, and the country’s lingua franca. But it only ranks fourth out of 11 as a home language.

South Africa’s linguistic diversity means that all 11 languages have had a profound effect on one another. South African English, for example, is littered with words and phrases from Afrikaans, isiZulu, Nama and other African languages.

Promotion of the Conservation of Natural and Cultural Heritage

SANParks annually embarks on initiatives to raise awareness of the organisation and its parks and promote a sense of pride in national parks in the general public. Free access is also provided to parks during National Parks Week, thus making parks accessible to citizens who cannot easily afford to visit the parks.

Languages according to mother tongue

Our rooms provide perfect OR Tambo Accommodation as well as Kempton Park Accommodation All of our spacious 17 rooms are either double or twin en-suite,…
04/07/2018
Kempton Park
Total views: 620

The District Municipality is named after Edwin Thabo Mofutsanyana. He was born in 1899 in Witzieshoek (now known as QwaQwa), a tiny reserve squeezed into…
28/10/2018
Phuthaditjhaba
Free State
Total views: 1002

C.A. on the Way is a firm that specialises in the preparation of financial statements. We also provide other services, such as taxation, secretarial work…
20/07/2018
Lonehill
Gauteng
Total views: 634

Bakali Foods offers a natural alternative to traditional snacks, our rice cakes and corn cakes are the best option for you. Rice and corn cakes…
03/07/2018
Midrand
Total views: 521

With our free wedding checklist, we would like to ensure that your wedding day goes according to plan. Your wedding day should be one of…
28/02/2019
JHB
Gauteng
Total views: 519

Dove’s Nest Guest House is your choice of accommodation in Gauteng, South Africa if you are looking for an affordable 2-star guest house that is…
04/07/2018
Kempton Park
Gauteng
Total views: 644

The Nketoana Local Municipality was established in terms of Section 14 of the Local Government: Municipal Structures Act No. 11 of 1998 and was published…
28/10/2018
Reitz
Free State
Total views: 680