Barkly West is a town in the Northern Cape province of South Africa, situated on the north bank of the Vaal River west of Kimberley. One of the first towns to be affected by the diamond rush, the district’s economy is … END_OF_DOCUMENT_TOKEN_TO_BE_REPLACED 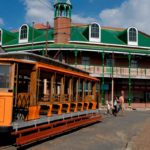 Area: 164,3 km² Population: 225 160 (2011) Area code: 053 Kimberley is the capital city of South Africa’s Northern Cape Province. It’s known for its 19th-century diamond mines, like the deep, hand-dug Big Hole. Nearby, the Kimberley Mine Museum is a re-creation of the town … END_OF_DOCUMENT_TOKEN_TO_BE_REPLACED